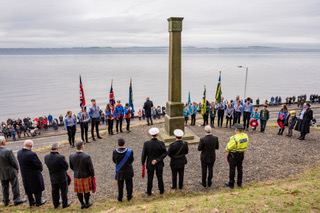 One of our Trustees, Brian Partridge, laid an MtSS wreath at the Limekilns & Charlestown Memorial (left) on Remembrance Sunday. The pictures were taken by Charlie Marsh, who is the son of Limekilns Primary School Head Teacher, Anne Marsh, who in turn organised the pupils to lead the hymn sung at the memorial. It is intended to put together an archive of the service, containing many of Charlie’s images, and material from other sources, to be placed in the likes of the church and the school.

Also, we added our wreath (right) to all those others at Scotland’s national memorial in Leith commemorating the more than 6,500 Scottish Merchant Navy personnel who fought and died in the two World Wars and other theatres of conflict, and also those who died while in service along the world’s trading routes during peacetime.